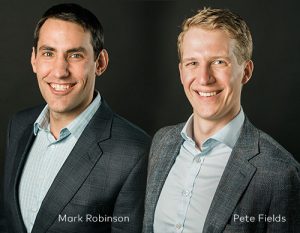 Great Range Capital promoted Mark Robinson to Managing Director, after previously serving in the roles of Vice President and Principal. Mark will continue to play an integral role across all investment functions of Great Range Capital, including business development, conducting investment diligence, execution and raising equity. In addition, he serves on the board of directors for Fairbank Equipment, and previously served on the board of HeartLand, two GRC portfolio companies.

Mark joined GRC in August of 2011, having previously served as an associate at Wind Point Partners, a middle market private equity firm based in Chicago, IL. Prior to that, Mark began his career at Piper Jaffray, a middle market investment bank in Minneapolis, MN, where he focused on the healthcare industry, working with clients on M&A, debt and equity transactions. He graduated with distinction from the University of Kansas with a degree in finance.

GRC also promoted Peter Fields to Vice President, after previously serving in the role of Associate. Pete, who joined GRC five years ago, will continue to focus on sourcing, evaluating and executing M&A transactions.

Prior to joining GRC, Pete was an Associate at LaSalle Capital Group, a lower middle market private equity firm based in Chicago, IL, and as an analyst at Piper Jaffray Merchant Banking, a late-stage, growth equity fund based in Minneapolis, MN. Pete graduated with distinction from the University of Kansas with a degree in finance.

“Both Mark and Pete are essential members of the GRC investment team,” said Ryan Sprott, Managing Partner at GRC. “Their promotions are well-deserved and we are excited for them to continue to grow their careers with our firm.”